Early History of the Area

Lands of the Wellton-Mohawk Valley have been under cultivation intermittently since prehistoric times. Spanish explorers followed the Colorado River to a point several miles above the mouth of the Gila, and found Indians living there and using the waters of the two rivers to irrigate their crops. The Jesuit missionary, Father Eusebio Kino, visiting the lower Gila and Yuma area in 1700, wrote of finding “little fields of maize, beans, calabashes and watermelons”.

In 1883, two headings (structures for the diversion of Gila River flows for irrigation) were built within the present District boundaries. One, south of Texas Hill, fed canals which served the “Mohawk Valley” on the north side of the river. The other, near Antelope Hill, delivered water to canals which served the “Antelope Valley” on the south side of the Gila, near Wellton. The lands produced excellent crops, and several thousand acres, rough leveled with teams of mules and horses and slip scrapers, were put into production.

In 1891, a very large flood on the Gila River destroyed the canal headworks, and much of the delivery systems that had been constructed. The river changed course at this time and, with the discouragement that followed, many families left the area.

Roosevelt Dam on the Salt River (the Gila’s primary tributary) was completed in 1911, greatly reducing the flow of the Gila. Even so, in January 1916, the Gila River ran its greatest flood in recorded history, estimated at 200,000 cubic feet per second (cfs) at Dome, near the western end of the District. In the spring of 1919, the river’s flow was slight and organized efforts at river diversions in the area were abandoned.

By about 1915, settlers were seeking a more dependable supply of water. With electricity for pumping now available, more and more farmers were choosing wells as the source of their irrigation water. The Mohawk Municipal Water Conservation District and the Gila Valley Power District were formed in the early 1920s to assist in the distribution of water and power. In 1931 there were approximately 11,000 acres irrigated by well water. By 1934, excessive salt had developed in the groundwater and the water table had declined alarmingly. The combination of extensive diversions far upstream, and an increasing number of irrigation wells close to the river eliminated, for all practical purposes, any surface flow in the Gila.

Farms were abandoned as water and soil became too saline for successful agriculture. Production that survived consisted mostly of alfalfa seed and bermuda grass seed, the only crops that were sufficiently salt tolerant to be grown profitably. In the early 1930s, farmers approached the Bureau of Reclamation seeking engineering advice and financing. After years of study and negotiations, this project was authorized. The Wellton-Mohawk Irrigation and Drainage District took over the assets and liabilities of the Mohawk Municipal Water Conservation District and the Wellton-Mohawk Operating Company, which had succeeded the Gila Valley Power District.

The history of Wellton in the late 19th and early 20th centuries is very much tied to the Southern Pacific (now Union Pacific) railroad, which played a vital role in the development of the area. The Southern Pacific line was built easterly from Los Angeles, and reached the bank of the Colorado River opposite Yuma on April 29, 1877. After completion of a bridge over the Colorado, the first train entered Yuma on September 30 of that year.

After some delay, surveying and grading resumed, and the first rails were laid eastward from Yuma on November 18, 1878, requiring a workforce of 1300 men. Normal progress was one mile of track per day. This was slowed somewhat by rock excavation required in going around “Cape Horn”, a name given to the north end of the Gila Mountains near the present heading of the Wellton-Mohawk Canal.

It is likely that surveying and grading crews came through the present site of Wellton (Railroad Mile 37 east of Yuma) in December, 1878, but not likely that rails reached the site of the town until some time in January, 1879.

The original alignment of the railroad was in and along the valley of the Gila River from the old mining community of Dome, at the north end of the Gila Mountains, to the present site of Wellton. The flood of 1891 washed out several miles of this alignment, after which the railroad was moved to higher ground along the mountains and mesa, approximately in its present location.

There was considerable difficulty with locomotive boiler scaling, caused by brackish water obtained from the shallow wells along the railroad right-of-way. In an attempt to get good water, several deep wells were drilled at one particular site. This location became known as “Well Town”, hence “Wellton”. A post office was established at Wellton on August 4, 1904.

Apparently, the deep groundwater at “Well Town” was still not of adequate quality. Southern Pacific began pumping water from the Gila River to a storage tank on the northwest shoulder of Antelope Hill. From this location, the water flowed by gravity to a tank at “old” Tacna, at Avenue 36, near the present site of Antelope Union High School.

There was a disastrous flood on February 12,1931, when a cloudburst south of Wellton caused Coyote Wash to overflow its banks. Water was four feet deep in part of the Wellton business district (Arizona Avenue). Two lives were lost and property damage was extensive. A section of the railroad was washed out and trains were delayed for two days. Such a flood could not take place today due to the protective dike constructed, as a part of this irrigation project, on the south side of the District’s Mohawk Canal. Runoff from a similar rain would be diverted westerly to the storm channel outlet into Ligurta Wash, and thence into the Gila River.

The Corps’ original operational criteria for Painted Rock called for a minimum release of 2500 cfs, to empty the reservoir quickly so as to be prepared for another inflow. However, because of potential damage to Wellton-Mohawk and to the two districts downstream, most releases have been less than 2500 cfs. Exceptions were the floods of 1979, 1980, 1992 (previous high of 5000 cfs), 1995, and of course during the 1993, 500-year event, when a flow of 25,577 cfs was passing over the spillway, of which approximately 20,000 cfs reached the District.

Flood damage to the District resulting from “controlled” releases is in the form of closed county roads, increases in deep percolation into the groundwater table from the flowing river, waterlogging of land and build-up of salts on the surface as a result of capillary rise, and additional drainage pumping requirements. The 1993 event, however, re-wrote the book on actual damage. The total cost of that event, including flood-fighting, reconstructed irrigation and drainage facilities, and repair or replacement of flood control works, was in the range of 75 million dollars.

When Painted Rock Dam was built, the Corps of Engineers acquired only flooding rights, not storage rights, in the area which might normally be considered a reservoir. Hence, the landowners upstream of the dam demand immediate release of stored floodwaters, while the District prefers no releases, or such small releases that the flow will be absorbed before it reaches this project.

Construction of the historically significant Mohawk Valley Road bridge over the Gila River at Antelope Hill began on June 1, 1914. At that time, this location was on the alignment of the main road from Yuma to Phoenix. 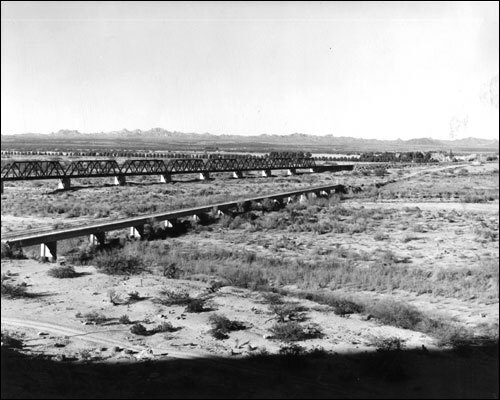 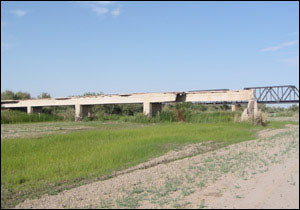 The bridge consisted of 10 concrete spans, was 642 feet long and contained 1857 cubic yards of concrete. The cost was $55,000, including losses from damages (estimated at $12,600) caused by local flooding during construction. Prisoners from the county jail provided much of the labor on the project. Completion was in August 1915, just prior to the mammoth flood of 1916. That flood, and others over the years (especially the flood of 1941), scoured material from under one or more piers, rendering the bridge unsafe. In the interest of public safety, one span was destroyed with dynamite on August 1955, so that the structure could no longer be used.

The Southern Pacific bridge over the Gila River, also at Antelope Hill, was built in 1925, and its design was greatly influenced by the flood of 1916. The railroad bridge is longer by far than the adjacent Mohawk Valley Road bridge, and is of a size greater than required by any flow that has occurred since its construction. 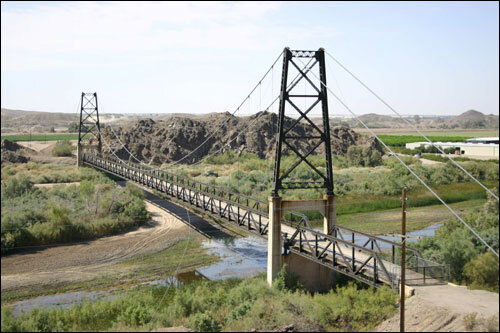 McPhaul Bridge, over the Gila River near the western end of the District, was constructed by Yuma County and the State of Arizona in 1929 on the Yuma-to-Quartzite road, now U.S. Highway 95. It is a graceful suspension bridge, with a main span of 798 feet. Unfortunately, it is of very light construction. With Painted Rock Dam greatly reducing the probability of large flows in the Gila River, McPhaul Bridge was abandoned when the state completed a new, low profile concrete bridge (on a new alignment) for Highway 95 in 1967. The new bridge was destroyed by the flood of 1993, and has since been replaced with a larger structure.

Since 1973, the District and Yuma County have joined forces on several occasions to keep county roadways open across the Gila River during times of river flow. At the present time, the District has funded or participated in the construction of four 10,000 cfs capacity bridges, at Avenues 20E, 30E, 38E, and 45E. Additionally, the District has acquired and installed eight 14’ diameter steel tubes at Avenue 51E, where a flow of over 10,000 cfs can be accommodated.