Soil Conservation and the Department of Agriculture

The Wellton-Mohawk Valley Soil Conservation District was organized by landowners in the fall of 1950 with approximately the same boundaries as the Wellton-Mohawk Irrigation and Drainage District. In the fall of 1958, the landowners in the groundwater-irrigated area to the east (Dateland & Hyder) asked to become part of the SCD. This inclusion, in 1959, enlarged the SCD by approximately 1,500,000 acres outside the boundaries of the Irrigation District. Soil conservation districts were redesignated “Natural Resource Conservation Districts” in 1974.

NRCD’s are organized under state law. They are managed by an elected and unsalaried board of local citizens. The U.S. Department of Agriculture’s Soil Conservation Service receives appropriations from Congress specifically for assistance to conservation districts. Each district is legally responsible under state law for soil and water conservation work within its boundaries, just as a county is responsible for roads, or a school district for education. During the period when efforts were being made to reduce return flows from Wellton-Mohawk by implementing “On-Farm Improvements”, there were two SCS offices serving the Wellton-Mohawk Valley Natural Resource Conservation District. The Wellton Field Office, which started working with area landusers in 1958, was until the late 1980s headquartered in facilities provided by the Irrigation District. The Wellton-Mohawk Special Project Office, established in 1975, worked on programs to assist farmers in improving irrigation systems on approximately 48,000 acres. As each system was implemented, it made possible irrigation efficiencies of greater than 75 percent. This work was part of the program authorized by Public Law 93-320 to decrease water use and thereby decrease return flows. The Field Office continues its work as before, but now operates out of headquarters in Yuma. The Special Project Office finished its work in 1986 and has been closed down.

In addition to providing soils information, engineering assistance, and conservation planning help, SCS personnel work with the NRCD board on conservation education. They assist local, county and state agencies and urban groups in resource planning, and maintain close contact with the Irrigation District, the Bureau of Reclamation, and the University of Arizona Agricultural Extension Service to further the NRCD program

Following are details on the principal crops grown here, as well as a crop report for the years 1987-2002. click here to view the report

Alfalfa has always been grown on a significant acreage in this District. Acreage rose as high as 27,107 acres in 1987. Alfalfa has an annual yield of from 8 to 10 tons per acre. Hay is shipped to dairies in Los Angeles, San Diego, and Phoenix, and to feed lots in Central Arizona.

Barley does well here, with yields of two to four tons per acre. It lends itself to double cropping with sorghum. There have been years in which there were 8,500 acres. However, since the advent of the improved varieties of wheat, barley acreage has decreased significantly, to zero acres in 1992, with slight acreages in later years. Malting barley is also grown.

Grain sorghum (locally known as maize) was formerly extensively grown. It can be double cropped with barley or itself, but wheat is the partner of choice. Yield is usually two to three and one half tons per acre. The crop is field thrashed and most of the grain goes to local feed lots. In the last several years, this crop has been grown only as feed for the local game-bird population, and not harvested.

Wheat has become increasingly important since the arrival of the Durham and hard red varieties. It was the largest of any crop in 1975 and 1976. The growing time for wheat makes it possible to double crop the land with sorghum. Local wheat yields are from two to four tons per acre. 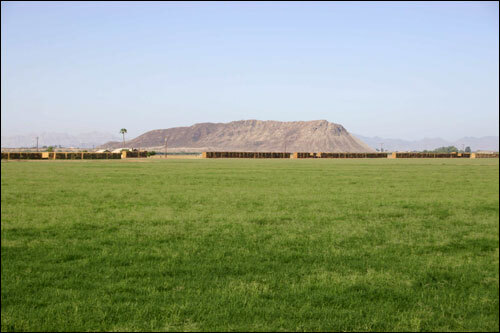 It is interesting to note that most of the world’s supply of registered bermuda grass seed is grown here. There are few other spots known where bermuda grass will even mature viable seed. Bermuda grass is used for lawns, golf courses, athletic fields, roadsides, parks, hay meadows and pastures, and for erosion control on levees and fields.

Bermuda is a very salt tolerant crop. During the period 1940-1952, when irrigation water was obtained from wells which were becoming more saline each year, this crop was the mainstay of farmers and kept them in business until Colorado River water arrived.

The soil, water, and climate of this area provide a very favorable environment for the production of specialty seed crops. Lettuce, okra, and onion seeds have been and are being produced. Cauliflower, broccoli, and alfalfa seed are also increasingly important crops. 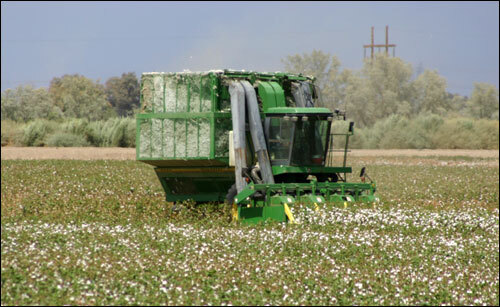 Cotton production in the Wellton-Mohawk area dates back many years prior to the use of Colorado River water. Limited plantings of cotton were irrigated from wells which had relatively high salinity content.

With the delivery of Colorado River water in 1952, cotton planting greatly increased as new lands were brought into cultivation. Acreage has varied greatly, depending on allotments and anticipated prices, from 5,900 to 16,463 acres over the period 1954 to 1996. Unfortunately, the pink bollworm and the boll weevil arrived in 1966, but farmers have learned to live with these pests, and get good yields in spite of them. Yields are two to three bales per acre. There are two modern cotton gins in the District and several in the Yuma area which are within reasonable driving distance. A small acreage of Pima (long-staple) cotton is also grown.

Citrus planting in the District took place on the Wellton mesa, which has warmer winter temperatures than the valley. The varieties include valencia oranges, grapefruit, tangerines, tangelos, and lemons. Acreage peaked at 7,375 acres in 1974. However, during the acreage reduction program in 1975, many citrus growers, because of production costs, weather, and market conditions, were willing sellers. Much citrus acreage was acquired under this federal program and retired from production. For the same reasons, some citrus land that remained in private ownership nevertheless had the trees removed, reverting to traditional field crops. Overall, citrus acreage has decreased to about 1400 acres in 1996.

Lettuce farming started here with a planting of 8 acres in 1956. This grew to 3,600 acres in 1965, 8,700 acres in 1973, just under 13,000 acres in 1990, and over 25,000 acres in 1992. This is a specialty crop that requires expert management and specialized equipment. It is highly speculative and must be planted on a rigid schedule, with the harvest date in mind. Thinning and harvesting require much labor. The ground must be irrigated before planting, continuously (more and more commonly by sprinkling) until the crop has sprouted, and very carefully and often during the growing season. 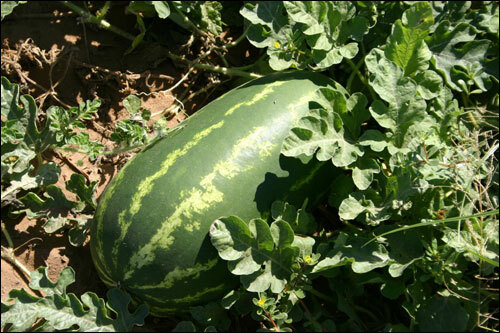 Cantaloupes and watermelons do very well here, but like lettuce, are highly speculative. They require expert management and specialized equipment.

The first cantaloupes were commercially grown here in 1954, with a planting of 25 acres. Acreage has varied up and down from zero in some years to 3,900 acres in 1969. Yields can be excellent, but vary from season to season.

Watermelon acreages have not been large, with a maximum of 800 acres in 1969. Again, this is a perishable product that requires a great deal of experience and market judgment.

There were about 600 acres of pecans in the District. A former stand of 40 acres of pistachios has been removed. Pecans were first planted here in 1969, with the first marketable crop expected in seven years. However, just four years later, a marketable crop was produced, and one has followed each year since. Yields have been as much as three times what was expected.

In the last several years, local growers have become interested in peanut production. In 1994, 341 acres were planted to this increasingly important crop.

Safflower was first grown commercially here in 1958. Acreage has varied with demand and price. There was a high of 9,400 acres in 1967; the next year there were only 900 acres. The current crop report does not list safflower as a separate crop.

There were only about 1000 head of cattle in the area in 1952 when Colorado River water arrived. Today there is one large feed lot, the McElhaney Cattle Company on the mesa east of Wellton, which custom feeds up to 100,000 head at one time. This feed lot competes with two others in Central Arizona for honors as the largest in the state, and is one of the largest in the United States.

Ewes (10,000 to 15,000 annually) are brought into the District in October from cooler areas in Arizona and Colorado. Lambs are born here in December and are shipped to market in March or April after shearing. Ewes are sheared in January and go back to the high country at about the same time that the lambs go to market.

Feeder lambs are brought in, usually from New Mexico. They go to market, after shearing, in February or March. These usually number 5,000 to 20,000.