An important factor in the application of irrigation water is the presence of salt, especially when the water is derived from rivers draining semi-arid areas such as the Colorado River basin. The water accumulating beneath irrigated fields can have a saline content highly damaging to plant life, even though it may be much less “salty” than sea water, which is about 33,000 parts per million. A large portion of the soil salinity, of varying chemical composition, is “imported” as part of the irrigation water. This salt has been dissolved from natural sources in the soil and rock of the watershed, and washes into streams with each rain or snowmelt. The use of water by growing plants, whether in a natural or cultivated setting, concentrates this naturally occurring salt. The applied irrigation water may collect additional natural salts as it moves through the soil profile to the groundwater table. The loss of water as evaporation from the surface of large storage reservoirs also causes a slight increase in the salinity of the reservoir water.

The Colorado River at Glenwood Springs, Colorado has a salt concentration of approximately 250 ppm. By the time the river reaches Lake Mead (behind Hoover Dam), its salt content is 700 ppm. At the present time, this increase is perhaps 50% naturally occurring, and about 50% due to return flows from upstream water users.

Irrigated areas must have either natural or artificial drainage to get rid of excess water that would otherwise “waterlog” the land, and also to dispose of the salts which accumulate as a result of the crop’s use of the water through evapotranspiration. In sufficient concentration, all salts, even fertilizers, can be injurious to plants. Salt can be tasted in drinking water at a level of about 1500 ppm.

The Bureau of Reclamation did not provide a return flow system as part of the original construction of the Wellton-Mohawk project. Although it was anticipated that drainage would eventually be necessary, Reclamation believed that a system could be postponed for several decades. But, the rapid rate at which land was put into production in the early years of the District, the magnitude of the need to leach (“flush”) the naturally salty soils, the water application requirements made necessary by high temperatures and light soils, and the nature of the underlying aquifer itself made the return flow system essential in less than ten years after Colorado River water was first applied to the land.

Other than a small amount of seepage (from farmland immediately adjacent) into the normally dry Gila River channel, the District’s return flow is made up entirely of pumped water. Early efforts to drain District lands using drainage tile met with little success.

It is no coincidence that local drainage wells resemble irrigation wells. Abandoned irrigation wells (dating from pre-Reclamation times) were pressed into service in the initial effort to control the rapidly rising water table when large-scale applications of Colorado River water first began. The successful use of these wells demonstrated that the aquifer underlying the District was very open, uniform, continuous, and of limited depth. Those same characteristics explained the rapid and widespread effects of the initial applications of development water. Once filled, this well-defined underground reservoir responded quickly to additional irrigation applications, or to removal of groundwater by pumping. The aquifer serves to collect percolated irrigation water and allows it to be pumped out, keeping the level of the groundwater, with its increased salinity, for the most part below the root zone of the crops. This responsive aquifer is one of the more unique features of the District, and is ideal for this effort. Wellton-Mohawk is one of the few irrigation projects in the world that can effectively and economically drain itself by pumping.

Except during Gila River flooding, the District has total control over the local groundwater table, using a network of approximately 90 wells, at a nominal spacing of about one mile. The wells, at an average depth of about 100 feet, are equipped with 40 to 75 HP motors. Drainage well operation is guided by computer printed graphs of groundwater elevations produced monthly by the District, using readings taken from 300 widely spaced observation wells. 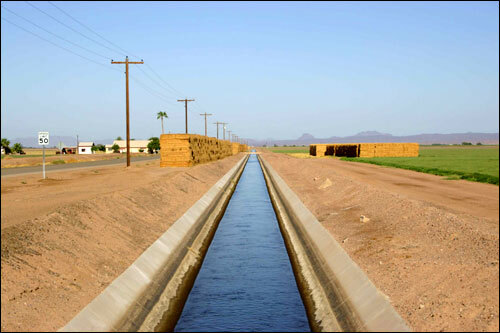 All drainage collector channels are concrete-lined. After being removed from beneath crops, return flows are prevented from re-entering the aquifer. Initially, the pumped return flows were discharged directly into the Gila River. Later, a concrete-lined main conveyance channel was constructed, ending just downstream from the Gila Canal siphon under the Gila River, at the western end of the District. At this point, the return flow was measured and allowed to flow into the normally dry Gila River, and thence into the Colorado River. The first discharge to the Gila from this channel occurred on February 10, 1961.

The return flow channel has since been extended, in stages, beyond the western limit of the Wellton-Mohawk District, to the Colorado River main channel, near Yuma. Coincidentally, the closing of Glen Canyon Dam on the upper Colorado River, and the sudden decreased flow of that river occurred at about the same time that Wellton-Mohawk’s return flow showed up as a “point source” discharge directly into the Colorado. (See COLORADO RIVER DESALINIZATION PROJECT, below)

Like many western states, Arizona has utilized the doctrine of Prior Appropriation as the basis of its laws governing the use of surface water. Until recently, groundwater was considered, rather simplistically, as the property of the overlying landowner, who could use that groundwater for any purpose, and in any quantity.

Early legal cases involving groundwater considered the questions of responsible use of groundwater, transportation of groundwater from the area of original pumping, and most significantly, the relationship between groundwater and nearby surface streams, regardless of whether those streams were perennial or intermittent. Realistically, the courts have held that the pumping of “groundwater”, at a location near enough to a surface stream to affect present or future flow in the stream, was evidence that some or all of the pumped water was NOT groundwater, but “sub-flow” of the stream.

For many years, the question of the legal status of the water pumped by the District for the dual purposes of controlling the water table and providing “trade-in” credit for additional diversions has been, if not actually avoided, certainly only of academic interest. This lack of concern was justified by the abundance of flows in the Colorado River, as well as frequent, if not regular, flooding in the Gila River. Until recently, WMIDD’s problem has been an oversupply of groundwater, resulting from normal irrigation applications keeping the underground reservoir “topped off”, or from rapid infiltration from the flooding Gila River. During this period, the Bureau of Reclamation has, on occasion, indicated that the ground water was the property of the United States, but BuRec has never made any real effort to restrict the few owners of private irrigation wells within the District.

In reality, WMIDD’s return flow is neither “true” groundwater, nor sub-flow of the Gila River. It obviously would not exist except for the application of large quantities of imported Colorado River water. If it is obviously not really groundwater, the overlying landowner has no legal right to pump the percolating waters beneath his property within the Wellton-Mohawk Project, except in an amount equal to natural replenishment which a hydrological determination might show available (if any). Also, he might be permitted to “mine” the amount of water determined to have been present prior to the area-wide application of imported water, and which will not be replenished by natural means.

There is no question that a hydrological investigation would reveal that, under present and normal circumstances, little if any sub-flow of the otherwise dry Gila River (or any of its many desert wash tributaries) enters the boundaries of Wellton-Mohawk, or contributes to the percolating waters underlying the District. A parallel investigation would demonstrate that local rainfall contributes almost zero recharge to the groundwater table in the area. This lack of recharge is typical in the Sonoran desert, except around the edges of the isolated mountain ranges.

Since Wellton-Mohawk’s net use (diversions less returns) is most definitely a part of Arizona’s entitlement in the Colorado River, it would seem that once the return flows are delivered to that river’s main-stem, they only THEN become the property of the State of Arizona, and not before.

Therefore, the great bulk of percolating water within the service area of Wellton-Mohawk is the property of the District, in its role as the municipal corporate representative of the landowners making up its tax-paying electorate. As the corporate owner of the percolating water, the District has the right to tap this resource, for the collective benefit of its landowners and water users, at any location where right-of-way for a facility can be legally acquired, and where successful pumping (whether for drainage purposes, or for the most beneficial return flow credit, in quantity or quality) can be accomplished.

It should be within the sole discretion of the District to determine if the owner of a private well should be challenged because of that private pumper’s actual or planned use of a municipal resource. Only after a challenge has been made should the matter be adjudicated.