Electric power was first introduced in this area in 1908 when entrepreneurs from Bisbee, Arizona set up a steam boiler, a 120 hp Corliss engine, and a 60 kw, 6600 volt generator, to accommodate Antelope Valley Irrigation District’s change from gravity flow to a pumped diversion from the Gila River. The generator was belt driven from the engine, and the horizontal water tube boiler was fired with mesquite and ironwood cleared from the surrounding land.

The generating plant was located in Wellton, and power was transmitted to the Antelope Hill heading where water was pumped from the Gila River. Power was also supplied to the growing number of irrigation wells throughout the valley. Thrifty farmers could reduce their power bills by swapping wood for kilowatt-hours.

In 1920, the Gila Valley Power District was organized with J. L. Terry, Ike Proebstel, Charles Hindman, Dallas Hovatter, and J. E. Sudlow as the first directors. In 1923-24, C. W. Taintor financed and built a 33,000 volt line from Yuma to a point about 8 miles east and north of Roll. Power was then available for many more irrigation wells, and for domestic use.

On June 12, 1942, the Gila Valley Power District entered into a contract with the United States for purchase of hydroelectric power from Colorado River dams, and on June 23, 1948, “GVPD” was allocated 2,000 kW from the Parker-Davis Project. The energy was furnished from the Gila Substation east of Yuma, which shortened the transmission line by about 13 miles.

In 1948, the Gila Valley Power District was reorganized as part of the Wellton-Mohawk Operating Company.

In 1951, the United States built the Wellton-Mohawk Substation at Pumping Plant 2, approximately eight miles west of Wellton, making that location the point of delivery for electric energy to the District. The 33,000 volt line built by Taintor was abandoned at that time.

The District, using a loan received from the Rural Electrification Administration, in 1954 rebuilt and greatly extended the transmission and distribution lines so that the entire Valley could be served with electrical energy.

By 1967, additional system expansion was required to cope with continuing load growth. A second transmission line was built from the main substation at Pumping Plant No. 2, extending eastward to Tacna. The Martinez Lake line was converted from 12,000 to 34,500 volts. Subsequently, three distribution substations at Wellton, Roll, and Tacna were rebuilt with modernized design and increased capacity. A new substation was built at Martinez Lake to serve the growing load, and to provide increased reliability and better service. 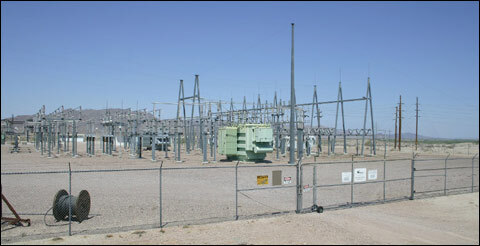 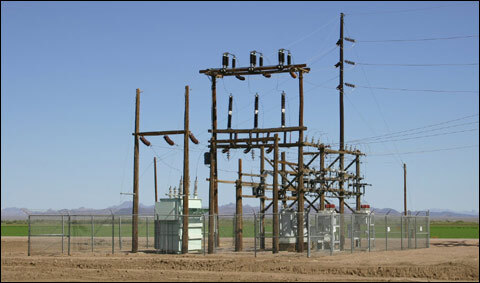 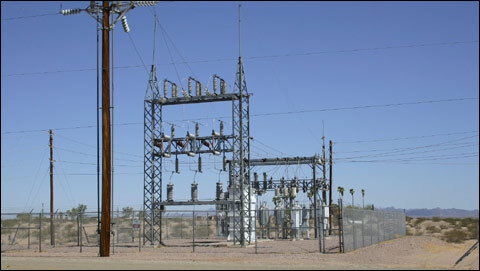 Dome Distribution Substation - Constructed during the Gila River Flood of 1993 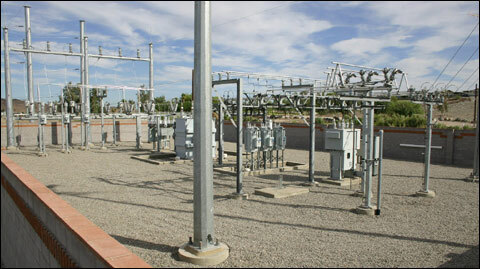 Between 1977 and the current time, load growth of the system has stabilized at approximately 1.5% to 2.0% per year. Almost all power system capital expenditures, and the great majority of construction effort, have been in the area of upgrading system quality and reliability, rather than expansion. Several major areas of improvement have been, (1), the increase in transmission voltage from 34,500 to 69,000, (2), the design and construction of a completely new 161kV/69kV switchyard/substation near Ligurta, (3), route selection, design, and construction of 11 miles of new, more serviceable replacement primary feeder line, including design, fabrication, and erection of a new tap structure, and (4), construction of several miles of new 69kV alignment to eliminate vulnerable double circuit transmission lines. Negotiation and re-negotiation of contracts for additional and renewed power supplies are ongoing challenges.

The District currently gets its power from three hydroelectric dams on the Colorado River, through contracts with the Western Area Power Administration (U.S. Department of Energy).

From 1954 until 1995, connected meters increased by 178% to 3053; capacity requirements peaked at 13.03 megawatts, an increase of 334%; energy increases were 358% and totaled 55 million kilowatt-hours. Annual revenue (unadjusted for inflation) has risen in this period approximately 1500%, to about 4 million dollars per year, and capital expenditures for system upgrades must follow to meet the need for reliable service.

In addition to the steadily growing power needs of the local population, the project power requirements for pumping plants, drainage, and relifts continue to be significant, using just under 100 million kilowatt-hours in 1995.